Prophecy's Language, book 4 in the Prophecy Series, is here!

The time has come for the release of Prophecy's Language, book #4 in the Prophecy Series.


She longs to hold him forever. He fears her hold on his heart.

She’ll need persistence to break through to his heart

Author Eleanor Donavon’s life is finally going her way. She kicked her mentally abusive ex-husband to the curb, and her writing career is taking off. But her contented world changes when a stranger, who’s the spitting image of one of her fictional vampire warriors, appears in her home on the pretense of whisking her away on a vacation. Believing him to be a cover model sent by her agent, Eleanor takes him up on his offer in hopes of getting to know him better. When she learns the truth about who he is, and the reason behind her imprisonment, her existence is rocked to the core. Now caught in the brutal politics surrounding the vampires, her only hope of surviving is to trust Sin. To complicate matters, she’s spellbound by the fierce warrior and falling for him hard. With her heart at stake, she must somehow break through his icy defenses to the man inside or forever lose him to his haunted past.

Her love gives him the faith to live again

Sin lives by his own code: don’t care for anyone and you won’t let them down. His past actions taught him that valuable lesson. When he receives the mission to abduct Eleanor, a beautiful author writing about the Vampire Prophecy, his heart jolts awake. For the first time in years he yearns to go against his principles and make her his forever, but fear won’t allow it. When she becomes a target of the Sacred Order, Sin risks his career to save her, but the real danger lurks when he realizes he can’t stop his head-on collision with love.

Currently only available on Amazon.
http://www.amazon.com/dp/B00VB0P84G 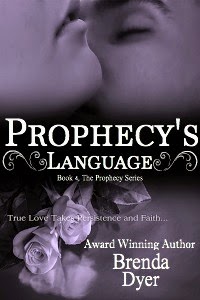