Please put your hands together and help me welcome the wonderful Victoria Adams to Romance With a Bite.

Hi,
I'm Victoria Adams. I live in Ontario, Canada with my husband and house full of pets. Daughter has grown up and is now teaching. I like to garden, cook and kayak. I've been writing since I was little.

Being an only child, long car rides were filled with making up stories in my head about the people I saw out the car window.

Circles is my first series.
Dancing in Circles, book 1, is to be released soon.
Circles Divided, book 2, to be released in spring 2012.
Circles Interlocked is book 3 of 3 and is published.
Available at - Ebook link - http://www.amazon.com/Circles-Interlocked-ebook/dp/B005S8LI46
Print – https://www.createspace.com/3863061

There are 3 or 4 more completed works are quietly nestled on my hard drive waiting for their moment to shine.

I'd love to hear from my fans. It helps to connect with what my readers what to read.
Now onto the incredible news – COVER REVEAL!!!!!!!!

Dancing in Circles is book 1 in the Circles Trilogy series.
One born into privilege and a charmed life surrounded by love and family. The other born to a life of violence on the streets as the solemn gang leader of the notorious Shoresmen. A young, idealistic co-ed, Julie, meets a jaded, cold gang member, Robert, and cracks his icy shell, allowing the warmth of her love to awaken his soul. 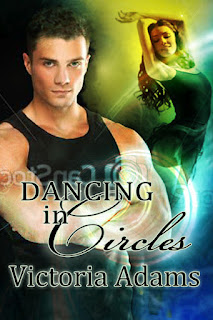 Robert stood near the beer line and watched as a brunette in a tight short skirt and low cut top strutted across the room and stood before him.

She dropped her gaze to his feet and moved it up to his hips then linked gazes with him. "Hello, tall, dark and totally fuckable." She dragged her tongue across her top lip.

Robert's chuckle started with a shake of his shoulders then moved to the crooked grin on his face before it erupted from his mouth.

She stepped in closer, slid her hand down his stomach and rested it on the inside of his thigh.

Robert didn't release his gaze from hers. "What? Ya want me to just rip your clothes off and do ya here?"

Robert flicked her hand off his leg then glanced left and right to see who had slipped their arms around his.

"Tonya." Tricia waited until the girl looked at her. "This gorgeous hunk of maleness is more man than you could ever handle."

Jennifer flicked her hand. "Go away now. He's all ours."

Tonya turned on her heel and stormed off.

"Thank you. But I coulda handled that myself."

"We're just protecting Julie's property." Tricia winked and wandered over to speak with a friend.

"Figured that out all by myself."

Christopher barged between them and bumped Robert's shoulder. "Guess Jennifer's starting to hang with trash."

Robert lunged forward, grabbed Christopher's shoulder and spun him around. Before Christopher could react, Robert slammed his palms on Christopher's chest shoving him back a couple of steps. "I am so not going take any of this shit tonight. Ya wanna take this outside and end it now?" His shoulders heaved with the depth of breaths he inhaled.

Refusing to make eye contact with Robert, Christopher glanced around. "I didn't mean nothing."

With one step, Robert invaded Christopher's personal space. "Yea, you did." He locked his gaze onto Christopher's and didn't blink.

Jennifer started to step forward, but Julie touched her arm. "No, leave him alone. Let him deal. He won't do anything stupid."

Several heartbeats later, a friend of Christopher's grabbed his arm, pulling him away.

Robert slightly turned his head and watched as they camouflaged Christopher into the crowd. He rolled his shoulders and twisted his head around then turned. All signs of anger had disappeared. He stepped closer to Jennifer. "Sorry. He shouldn't have insulted ya. If ya want me to go, I'm outta here."

She handed him an unopened beer, rose up on her toes and placed a tiny kiss on his cheek. "You did good. He's an ass." Smiling at the surprised look on Robert's face, she walked over to a group of girls to mingle with her friends.

Still holding the beer, Robert walked nearer to Julie and pulled her close. "Thanks. I heard what you said. Thanks for trustin' me." He pressed his lips against the velvet skin of her neck and inhaled the aroma of her perfume. He wanted to trail kisses up her long neck and lose himself in the touch of her soft pink lips, instead, he stood before her gazing into her eyes.

Julie's voice went mute at the touch of his lips. The heat of his flesh on hers made her mind swirl. Through the noise of the crowd and the fire that raged in both of them, the sound of music broke through.

"Wanna dance?" He breathed across her ear.

Thank you so much, Victoria Adams. It was an extreme pleasure having you here today.

I absolutely adore your cover.

Thank you fro letting me visit to day and show off my new cover.

Victoria, thank you for choosing my site to reveal your beautiful cover. I'm in awe.

The cover looks pretty but did you mean to post a version that still has the stock photo water marks on it?

I love that you kayak...it's on my list of things to try!

Congrats on your new release and gorgeous cover!

Awesome cover Victoria, and so nice to hear about another Canuck writer of romance! Congrats!

I stopped in at my site again to gaze at your cover some more. Love it.

Congratulations on the cover - it's great! Thanks for the excerpt

Thank you to everybody who dropped by.

That's such a fantastic cover. Love it. I really loved that excerpt too. Congrats on the upcoming release, Victoria. :)

Wow...seriously, WOW! You guys are so awesome. Thank you all for stopping in and showing Victoria support.

Hey, cool cover and explosive blurb! Glad I made it by. Congratulations!!

That is a great cover, and I love the characters. "You did good. He's an ass."
Priceless! Hmm, wonder how many times I've thought that and not said it? LOL!

Beautiful cover! And such an intriguing excerpt. Sounds like a great read.

Congrats on the cover and your upcoming release!