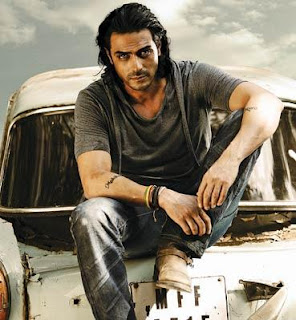 Brenda:  Hello, Mel. I'm glad you could make it. I know how busy you are.

Mel: Thanks for having me. I can't stay long. Have to meet Kal and Soren at The Green Tree then head out hunting. But I'd like to check on Breeana first.

Brenda: *smiles* I totally understand. I know we can't say much in case we give some of the book away, but how is Breeana doing?

Mel: *smiles back as he visibly relaxes* She's doing very well--thanks for asking.

Brenda: Glad to hear it. Tell her I said hi.

Brenda: So, during the writing of Love's Prophecy, was there a time where you thought you and Breeana wouldn't end up together?

Mel: Yeah. I wasn't sure after the demon bitch got her filthy hands an Breeana if I'd ever see her again. I thought for sure my plan wouldn't work--thought we'd all kick it.

Brenda: *Laughs* Nice to know you had such little faith in me.

Brenda: I thought Breeana talked to you about your pessimistic crap?

Mel: She did--and because of her, I'm learning to have faith in myself.

Mel: Sure. You're the interviewer.

Brenda: What happened after your father's death?

Mel: *He shifts in his seat and glances at the ceiling before looking at Brenda.* I buried my mother, then left--or more like I ran.  I wandered from city to city, town to town before I ended up in London. I was...not doing too well at that time. I was a drunk, living in the streets. I didn't have a purpose and I didn't give a shit. Then one evening I came across Roarik. *laughs.* Seems both he and I needed to feed and we were both going after the same human female. I was so sloshed I ended up scaring her away. I was also half starved for food--and broke--so I decided to rob Roarik. *laughs again.*

Brenda: *laughs* What'd he do?

Mel: Beat the shit outta me, then noticed my tattoo and realized I was a warrior--although back then I didn't look or act like one. Anyway, he offered me a job and a home--offered me a chance to get my shit together. *Shrugs* In a sense he saved me.

Brenda: No wonder you two are close.

Brenda: I'd like to ask you a question about your uncle.

Mel: *His shoulders stiffen and a frown creases his brow. He sits straighter in his seat before folding his arms across his chest.* What do ya want to know?

Mel: To be honest, I don't know. I left and never looked back. But I'm sure my uncle looked after things until my brother was old enough to take over.

Brenda: Speaking of your brother, I take it you've never contacted him...

Mel: Frown deepens.* Nope--and I have no plans to. You know what happened between us--and I'm sure he hasn't changed.

Brenda: Sorry, but I wanted to ask. Next question. Does your uncle know where you are--what has become of you?

Mel: *Shrugs, but a look of sadness fills his silver eyes.* Doubt it. And I think it's best to keep it that way.

Brenda: Do you miss him?

Brenda: Yes, and I'm sorry. But you and he were close--your uncle cared for you and you him, so...

Mel: Breeana feels I should try and contact him. *shrugs again* I'm seriously thinking about it, but...

Mel: No matter how much he cared for me, I did kill his brother.

Brenda: I see. I still think Breeana is right--I think you owe it to yourself and your uncle to contact him. But I'll change the subject. In Love's Prophecy, Kal mentions to Breeana something about him getting you and Soren in trouble. What was he talking about?

Mel:  *shakes his head before laughing* Seems I'm never going to live that night down. I finally told Breeana what happened; she still brings it up. In short, Kal pulled one of his bonehead pranks and brought the wrath of Roarik down on Soren and I.

Brenda: *laughs* That's it? No details? Come on, Mel. Share with us. Inquiring minds want to know.

Mel: All right, but really you should ask Kal--he tells it a little differently--probably because he remembers more of it than I do. I was...a little inebriated. *chuckles.*

Mel: To keep it short, Soren and I had returned to the base early this particular evening. We decided to relax, listen to some music and have a few beers. Well, a few turned into a lot. I guess by the time Kal returned, Soren and I were pretty shitfaced.
Anyway, Kal let off a couple of bottle rockets in the house--Soren and I didn't hear them because of the music, but Roarik did. Kal had placed a bottle rocket on the table beside Soren--without us knowing--shows you how drunk we were. *Laughs.* Roarik barges in and screams bloody murder about us letting off fireworks in the house. Of course Soren and I had no clue what he was flipping out about. The next day Kal tells us what he did.

Brenda: *laughs so hard she almost chokes* What...*laughs more* What did you two do to him? I can't imagine you guys let him get away with it.

Mel: *laughs* Nope. Suffice it to say, Kal was sporting a black eyes and a fat lip--plus we made him tell Roarik what he'd done. Soren also took Kal's favorite video game and hid it. *laughs again* Soren made Kal swear he'd never pull another prank on us before he gave it back.

Brenda: Did the promise stick?

Brenda: I'll take that as a no.

Brenda: Mel, it's been a pleasure. I won't hold you up any longer. Say hi to Breeana and the other warriors for me.

Mel: *leans forward and shakes Brenda's hand* Will do, and thank you. The interview was my pleasure.

Brenda: I would like to interview Breeana in the coming weeks. I'll call and set up a time.

How do you do that? How do you pull me out of my house and put me in the audience watching your interview take place?

What a fun interview! Mel is a looker! Off to share!

That was a really great interview.

Sheri, Sandy, and Ella, thank you very much for stopping by.

That was an awesome interview, Brenda! Love the pic of Mel also. I can't wait to get my hands on Kal's story! :)

Excellent intreview, Brenda and Mel! Love that photo too. Yum!

I appreciate you all so much! Thank you for stopping by and leaving Mel and I a comment.

What a great character interview! You really have a nack for bringing out your characters. Gosh, I can't wait for the next two weeks to be over....then I can finally read your book! Yay!