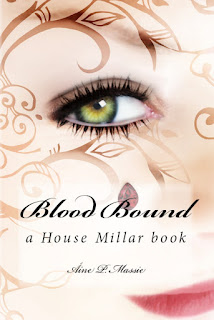 How many ways can a hearts true love be shared? After poisoning, near death attacks, consummated passions, and possible insanity visit Anya, Nicholas, and Declán they embark on their future. Or at least they try to. Jealousy can be a pain, in more ways than one.
Can Anya protect her lovers, find peace within herself, and lead the House Millar? With her loves and guards, Nicholas and Declán, she sets out to do just that. If only life, eternal life, were that easy.
Come take a walk with our loving family and witness the strange turns and twists as life, love, and passions collide with greed, politics, and evil.

I stripped my clothes off after climbing into the shower, taking a strange pleasure in watching the rivulets of blood slough off my body and swirl down the drain. This wasn’t a shower for pleasure or comfort though; I wanted to escape what had just happened. I turned up the heat again, hoping to burn the sick feeling of their skin and blood off me. I couldn’t seem to calm completely. I wanted, craved more of an outlet for the frustrations. Holding in my power all the time wore on me but what else could I do?
Growling in frustration I punched the wall, not the smartest thing to do considering. The beautiful tile cracked where the wall dented in around my fist. Great, now I have to have the shower wall fixed. With a heavy sigh I slid down the back wall into a sitting position letting the water crash down over my head taking with it the proof of my out of control violence.
Ma dame? Louis’s voice intruded cautiously on my solitude but considering the sound the punch had made I wasn’t surprised really.
Don’t worry, Louie. The only danger in here with me, is me.
Yes, Ma dame. Let me know when you’re finished. I have fresh clothes for you. He’d slipped back into servant mode, which was strangely comforting.
Thank you, Louie. Soon. I spent a little longer working through my frustrations and hair. With hair so long and thick it took a while to get all the blood out.

“Mine? You should check yours out sometime. As if being with Nic and me wasn’t enough to question it, now you’ve added Louie but in some type of servant-slash-lover position. I think you win the straight jacket award. But your taking of Louie actually isn’t what I wanted to question you about. Your battle lust is more my concern right now. You had a hard time calming down and being yourself again. You really didn’t seem better till after the shower, though smashing the tile seemed a little excessive to me.” I could see true concern in his eyes.
“A ghrá, I don’t know how to explain what’s going on inside me. I hate fighting because I enjoy it too much. I like it. Not the death part but the power.” I was trailing my fingers down his arm, enjoying the feeling of his hard muscles. For someone so powerfully built and trained it was almost comical that he was in college for architecture.
“Oh, I know you like the power,” he said gripping my wrists suddenly and pinning them down. “But you like the resistance too. You like to dominate, to conquer, but you like the fight as well. It’s something you haven’t quite figured out yet, I think.” He had a dangerous, hungry look in his eyes but wasn’t pushing beyond restraining my wrists.
“Oh I do, do I? I think you just like me trying to dominate your strength some days.” Flipping so I was straddling his waist and pinning him, I stared into those eternally deep sapphire blue eyes of his. Goddess knows I still wanted some form of physical release for this energy!
“Yes,” he panted as he struggled to break my hold on his wrists. I never use much of my strength with him, always too afraid to hurt him. For some reason I wasn’t being as careful this time. He would have to be more than just strong to win this one. “And I never said I didn’t like fighting back.” With that he bucked catching me off guard and allowing him the momentum to turn me over. He was smart though, he stretched out so his body held mine down as his legs and hands pinned me.
His face was only inches away and as the heat crashed over me a swirl of images came to mind. Pleasing yet disorienting. Disturbing . . .

Áine P Massie is originally from Florida, she now lives in Wisconsin where she works on her House Millar series full time while raising four children (the term herding cats comes to mind). Her major in College was Childhood Education (0-5) with a minor study in Deaf Culture/ASL. She is also a Wiccan priestess dedicated to the gods, family, and love.
A lifelong reader, Áine has always had a particular fascination with vampires, mythology, and the unusual. When she can escape from her children and books, she enjoys . . . oh yes, reading, playing, ritual, a good cappuccino, and working with her healing stones.
Her first published work came in high school where she was part of a writing and drama group. But, she’s been reading the likes of Shakespeare and Poe since late elementary school and enjoys most forms of fiction. Blood’s Voice has been a long time in coming and with its publication (June 2011) Áine embarked on a new chapter in her life.
Áine P Massie is currently working on her third novel, Glamour Blade. 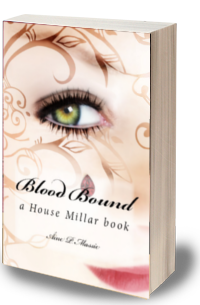 I really need to read this book. Great excerpts. :)

This is a great book and a great series. Wishing you many sales.

Aine, I have both of your books. I just need some quiet time to read them.

Thank you so much for being on my site, Aine.

Congratulations on your books! How exciting.

Loved the excerpt! Thanks for sharing!

Loved the excerpts! Will definitely check out the book. :)

Thank you everyone for stopping by and leaving a comment.
Both Aine and I really appreciate it.

Super congrats on BOTH your releases! Awesome!