Ashlynne Laynne and The Progeny 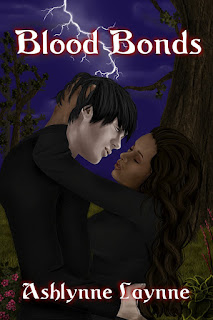 Blood Bonds is the second book in the Progeny Series. Today Brenda Dyer has been very gracious in allowing me to reveal my cover and blurb here on her site. Thanks so much, Brenda. So without further delay, here is the next installment in Ascher and Shauna’s journey...
Blood Bonds (Progeny Series #2) Blurb:
“Forever. For always. For eternity.”
The ties that bind two hearts are powerful. For Ascher Rousseau and Shauna McCutchin, it’s more than just a blood bond. Their union is that of vampire legend. Their love is a predestined prophecy foretold centuries ago.
It’s a week before Ascher and Shauna's sealing and the couple is making final preparations for their eternity. But Ascher's ex has other plans. Ursula is hell-bent on revenge—revenge fueled by lover's scorn and her father's death—and she begins breeding a fresh army of newborn darklings to do her bidding.
When Ursula finds a new weapon—an ally with the capability to dismantle the Rousseau clan— Ascher and Shauna's bond is tested and they must stand together against Ursula or lose each other for eternity.
Posted by Brenda at 12:01 AM

Thanks for having me in today, Brenda. I'm at work now, but I'll try to drop back in later today.

You are so welcome.
I will get the link out so others can come and see your new cover!

The bond that ties them together sounds interesting. I wonder what happens if it broke... Congratulations on your release!

Those ex's are from Hell aren't they? Sounds terribly wonderful :)

I can guarantee that the new books are gonna scorch and sizzle as Ashlynne just keeps getting better and badder...LOL Great spot! I also adore the Hostess here, so I am a truly biased commenter, lol
(Wicked gives you both her best and naughtiest wink)

Thank you all for coming and showing some love to Ashlynne.

Okay, I'm late but it was a long day at the day job. Just wanted to say congrats and happy sales. This sounds like a great read.

Wish I had time to respond to each of you individually, but I'm quite busy these days with books three and four of this series, book one of another series and an untitled novella WIP. Thanks so much for dropping in guys. We're pretty excited, about the re-release of The Progeny and release of Blood Bonds, over here at the Progeny camp. There are so many awesome things coming for this series and the new series. I hope all of you will continue on this journey with Ascher and Shauna. Again, thanks so much for having me, Brenda, and to all of you for taking time out of your busy days to show support!

Ashlynne, it was my pleasure.