The Birth of a Novelist 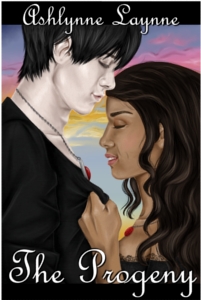 Please welcome author, Ashlynne Laynne. Her novel, The Progeny took my breath away. I will step aside and give Ashlynne the floor.
Ashlynne Laynne: The Birth of a Novelist
The Progeny Blurb
“No fate other than the one I choose.” The timeless creed, and tattoo, bore by the Rousseau’s— a vampire clan with the purest bloodline of any vampire family. Out of this clandestine group came one who was different, yet the same: Ascher - a half-bloodling— half- human, half vampire.


Ascher questions the purpose for his existence and which world he truly belongs to: the human world or the vampire world. Two months from sealing to Ursula— a prearranged union to a woman he abhors — he’s at his wit’s end. He knows if he calls off the sealing, the Romanian clan will strike with deadly force, but he cannot see eternity with a cold empty shell of a woman like Ursula.

Great stop on the tour, Ashlynne and Brenda! Off to share!

I have a dream I'd like to write into a novel some day too, but I doubt I'll ever get there. Too many ideas, too little time. Your novel sounds great, Ashlynne. The cover's cool too.

Nice job! I loved the part about a writer is born!

Loved the idea of a peom and the peom was very beautiful.

Aw how sweet you won an award at age 8! Awesome spotlight!

I'm a rabid Stephen King fan too, but I'd never be able to write horror. Kudos that you can take your love of that genre and make it your own. Great post.

It's always interesting to learn how an author gets their start. From elementary school submission to published writer. Congratulations!

Thanks for dropping in, Sandy. I'm really looking forward to hosting Brenda as my blog's first Author Spotlight next month. I can't think of a better way to begin!

Allison,
Thanks for coming by. Those dreams really weirded me out at first but now I look forward to them. They occur so often that I keep a notepad and pen beside my bed so that I can write them down. I'll make sure that my artist knows that you love her cover. I like being different and her work gives me that. Brenda has the exclusive to the cover reveal. I've seen the drawing and it's outrageous!

D'Ann,
Love your name! This was a very personal piece for me. It gives the readers a glimpse of the other side of me. I write under a pen name and essentially consider myself two different people. I'm my give name, a wife and mother. Then I'm also Ashlynne, the passionate writer.

Maggie,
Thanks for dropping in. I'm so glad that you loved the poem. I loved it too when I wrote it five years ago. I never though that I'd ever use it as anything other than for my own enjoyment. When I started writing The Progeny, I realized that this poem would be more. I used it as a sort of inspiration for the love story between my characters. Once you read the book then this poem after the story it definitely makes an impression.

Martha,
Thanks for coming by. I still have that little gold pin in my childhood scrapbook!

Jenna,
He's great, isn't he? My work is horror inspired but I lean heavily on the romantic side of it all. The horror only comes in the fact that there is dark stuff like vampires and witchcraft involved. Like you, I'm not sure how much I'd like dreaming about characters in a really horrific setting. I dream about my characters so I have to be careful! Thanks for coming by!

Sheri,
Thanks for coming by. It's been a long time in the making. I laugh sometimes because the first novel I ever wrote was Christian Romance. Very different from what I'm doing now. I still plan to release that series at a later date. Those characters are just as engaging and the story will appeal to a broader group of readers.

Love this new author. She is gonna rock the book world!

Leanore,
Thanks for dropping by. I hope to one day rock bookshelves and melt Kindles like you! :)

The book sounds great! Much continued success with your writing!

Loved your story! And LOVED your poem at the end. Always interesting to hear about how other authors develop their story or stumble upon their dream of writing.

I had to laugh at the beginning of your story. That's exactly how I started. I won an essay contest, had to go to a huge hotel to read my story for a bunch of people, was applauded, several people came up to me afterward to congratulate me and I was hooked. All before I was a tween I knew what I wanted to do...lol

Congrats on your book!

Ashlynne, it has truly been an honor to have you take over my blog today--and I would love for you to come and visit us next month.

To everyone who stopped by and left a comment for the fabulous Ashlynne Laynne, thank you very much.

Getting to this late due to the day job but glad I didn't miss it. Ashlynne and her works sound super interesting, thanks for sharing!

Brenda,
You're such a doll! I'd be more than happy to pop in once a month a share some news. We should have a cover to reveal soon. Thanks so much for having me!

Melissa, Thanks for dropping by. It's been an experience for sure!

please dude visit my new blog! It's a website were people can post their poems and have them reviewed and critiqued and admired and stuff!
http://featuremypoetry.blogspot.com/