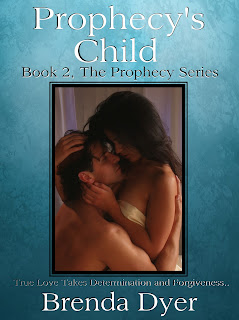 Feeling like the biggest fool alive, Katherine scrambled off Kal's lap. The walls guarding her heart slammed back into place. “I want you out of my house and never come back.”

Kal jumped up, stalked around the coffee table, and stopped in front of her. “I can’t do that.”

Her eyes narrowed, and she leaned forward slightly. “Let me make this crystal clear. I may despise my parents, but I hate you with a passion so intense I’m afraid I’ll explode. As sick and twisted as they are, at least my parents discarded me because they thought they were doing God’s will. You abandoned me because you’re a worthless coward!”

“For Christ’s sakes, Katherine. There’s more to it than that.” He grasped her arms. “If you’ll stop insulting me, I’ll explain everything.”

“Let me go,” she said through gritted teeth.

“Not until you hear me out.”

“Let me go right now, or so help me.” She tried to jerk her arms out of his clasp, but he tugged her closer.

He stared down at her, his blue eyes dark with anger. “You’ll what? Tell me how much you hate me? You’ve done that—repeatedly. I need you to sit down and listen to me.”

With a violent tug, she yanked free. “How dare you demand anything from me? And if you think you have any rights where Ike is concerned, then you are more deranged than I thought. Now leave before I call the cops.”

“Let’s get something straight right now. I’m going to be there for my son whether you like it or not.”

Without thinking, she drew her arm back then shot it forward. As her hand connected with his jaw, a sharp crack filled the room. His head snapped to the side.

She didn’t see him move. But before she had time to register the burning pain on her palm, his body was tight against hers, the hand she’d slapped him with pinned behind her back, and her chin held steady in his taut grip.

His expression turned thunderous; brows pulled together and eyes blackened with an emotion she couldn’t name.

“Don’t do that again, Katherine.”

“I’d never touch you in violence, and it hurts me you’d suggest it.” His face lowered until his lips were a hair’s breadth from hers. “My touch would only bring you pleasure.”

His words shot straight to the throbbing flesh between her thighs. Desire tried to drop-kick anger aside. Neither would budge, so both fought for supremacy.

Her breathing turned to shallow gasps, which brought her breasts in contact with his hard chest. Her nipples hardened.

Come on. Just do it. You’ve pleasured yourself to his memory for ten years. Those memories are old, stale. Why not make a new one to use for the next ten years? No! Don't be a fool. You know his touch comes with a price you’re not willing to pay—your heart.

Kal released her chin and then smoothed his hand over her cheek until he cupped the back of her head. His fingers tangled in her hair. “Katherine,” he whispered before his lips claimed hers.

Prophecy's Child is coming soon.
Posted by Brenda at 8:12 AM

I love the passion behind these characters! She hates him so much because she loved him so much and Kal clearly hides his feelings behind his goofy personality. Can't wait to get my hands on this thing! And I LOVE that cover!

Oh wow...I can't WAIT for your book to come out! SQUEE!! Excited doesn't even come close.

LOVE the cover and the snippet. As having had the honour of doing a beta on this book I can say - it is FABUUUUUUULOUS.
tweeted

wow! That is all.

Very happy to see this next book come to light, and congrats, Brenda!

Thank you all so much. I'm excited for this book's release.

OMG HOT I love this excerpt. I can't wait...you have to come on my blog for promo!

What a quiet shy peaceful loving couple you've got here.

Actually I remember a scene rather like this with my Ex who'd tried to kill me 3 times.First part, not romantic ending.

Sigh with happiness, life got so much better without him. However, your guy seems much nicer, so I can see why you want to keep him.

Oh, that is evil to give just a little taste! I want to read this so bad! I loved Kal in the first book--cannot wait for his story!

Thank you all for stopping by and leaving me a comment. You guys are so awesome!