Before humans and vampires. Before the war and the Vampire Prophecy, The Creator made the angels. Following His instructions, these heavenly offspring created the Earth.
Filled with pride and love for what he helped build, Lucifer desires ownership of this wondrous planet. But when he learns the true meaning behind the Earth’s creation, Lucifer retaliates and starts an evil chain reaction that threatens not only the existence of mankind, but also the survival of the vampires sent to protect them.


This is the story of Lucifer’s rebellion and the affects that have echoed down through the ages... 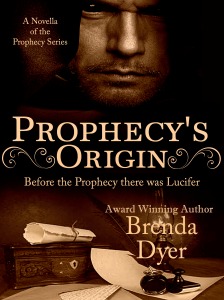 Demons scattered as Lucifer stormed across the stone floor of his dungeon. He stopped and glowered at the thousands of human souls locked behind the enchanted metal bars of what he called the Holding Cage. The sallow faces of the spirits showed their fear. As a group, they shrank as far back as they could from the bars.
Good. The pieces of shit understood who and what he was. He was King, and their fate was in his hands. And he knew from experience they’d beg for mercy. But they’d get none from him. Ever.
As he eyed the ghostly figures, hatred grew until his frame vibrated. Humans were the bane of his existence. These sniveling, weak, worthless creations had ruined his life—stole everything that meant anything to him.
Because of humans, all that he held dear had been stripped away. The joy and love that had once filled his heart and soul had turned to bitterness and hate.
So no, they’d receive no mercy. And why should they? Did they show mercy to their victims? Did they show mercy while raping, killing, and stealing?
No.
Here, in the realms of Hell, they would get what they deserved, plus more.
But more importantly, his Father would get what He’d deserved for lying, stealing, and cheating Lucifer out of what was his!
“Take them to the Pit,” he snarled to his servants.
“Yes, Lord Lucifer.” A demon bowed its blackened head before hurrying toward the cage. Scraggly brown hair floated around its bony shoulders. With a jerk, it came to an abrupt halt, frozen in place by invisible restraints.
Lucifer had stopped the fucker in its tracks with his mind. He’d warned them repeatedly to address him by his new name. No longer did he want to use the name his Father had bestowed upon him.