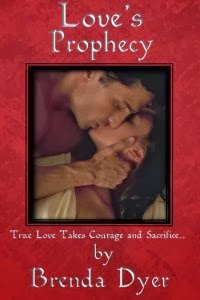 Mel is a vampire warrior sworn to hunt and kill demons in the dark streets of Vancouver. But he's burdened with a new assignment: find the meaning behind the Vampire Prophecy. Having no faith in the gods and their empty words, he believes there's no truth to the ancient legend until he meets Breeana, a human woman who bears the mark of the prophecy and resembles the mysterious woman haunting his dreams. When a vengeful demon spies Breeana in his arms, she is marked for death. He must take her from the world she knows until he can eliminate the threat. But the real danger is the role Breeana must play in fulfilling the prophecy and the intense feelings she brings out in him. Mel is forced to choose between his obligations to his kind, the world, and the woman he loves. Does he have the courage to let the one woman who could heal his wounded heart and soul go, or will he bind her to him for all eternity?

Veterinarian, Dr. Breeana Spencer yearns for love and companionship, but the disappointment of failed relationships has left her bitter. She now finds solace in romance novels. But when she meets a mysterious stranger, she's drawn to him by a connection so forceful it shatters all reason, leaving her incapable of resisting him. As Breeana’s drawn deeper into his danger-filled world, she learns she's part of an ancient vampire legend. Breeana fears her future is no longer hers and will not include Mel. As their enemies close in, desperate to destroy them both, she must fight to convince Mel her place is at his side. A life-altering choice is before her—one that will take all her courage and love to make.

“I'm doing this for your own good,” Mel shouted.
“My own good? You're doing this for your own good.” Breeana’s eyes widened. “Oh…my God. You never loved me.”
“How can you say that—”
“If you did, you wouldn't be able to imagine a second without me, so—go to hell!” She jabbed a finger toward the door, her body vibrating with unrestrained rage and pain. “Get out.”
Mel grabbed her arm, but she jerked it from his grasp. “Breeana, you're better off without me. Please try to understand. This isn't easy for me either.”
Madness completely took over and she spun away, screaming, “Don't touch me! Just…leave so I can pack.” She marched across the room to the closet and grabbed her bag.
“Breeana, please listen to me.” He tried to stop her by stepping in her way, but she stalked around him, grabbing her clothes along the way, shoving them into the bag.
On her way to the bathroom, she stopped and glanced at him over her shoulder. He stood in the middle of the room, his face a mask of hurt and pain. “You're right about one thing, I do hate you. I hate you for breaking my heart. I hate you for deceiving me, but most of all, I hate you because you're a coward.” The last one was low but she really didn't give a shit. She wanted to hurt him. Wanted him to feel as miserable and dead inside as she did.
“If you believe nothing else, believe that I love you and always will.” He took a cautious step toward her but she backed away, holding up one hand.
“Don't.” She sniffed. “I can't—I won't listen to any more of your lies.” She brushed at her damp cheeks. “God, I'm pathetic. I was really sucked in by you, wasn't I? Did you have a good laugh at my expense? This silly little human woman falling for all your bullshit. Well, I see you now for what you really are.”
He launched at her and grabbed her arms, hauling her against his chest. “Don't you dare. I never lied to you.”
She tore from his grip, her breath coming in shallow gasps. “You're right, you didn't lie. I guess I was just a fool and an idiot. I was hoping our love would be enough, but obviously not. Though I may be an idiot, but at least I'm not a coward.” She squeezed her eyes shut, blocking out the hurt and anger on his face. “You're so afraid to take a chance on love because of what-ifs. You're so worried that something will go wrong that you opt to throw it away first. And if you think so little of yourself that you feel you don't deserve love, then you are more messed up than I thought.”
Mel backed away from her until the backs of his thighs hit the bed. He sagged down. His eyes were slits of glittering silver riveted on her face. In a barren voice he said, “If you need to hurt me, go ahead, I deserve it, but never question why I'm doing this or that I love you. I do this only to keep you safe.”
“If I hear that excuse one more time, I'm going to scream. You do this to keep yourself safe. You never even gave me a choice. You made the decisions for me. You decided I would come to hate you, not me. You decided I'd be better off without you, not me. So, please, get out and let me pack.” 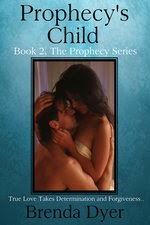 His secret will shatter her world.

Katherine Colby’s life splintered ten years ago when her lover suddenly vanished, leaving her with more than a broken heart. But when Kal unexpectedly makes an appearance, her safe, dependable existence is shattered once more. Drawn into Kal’s deadly world of vampires and demons, she must now put aside her hurt and anger and learn to trust him. Can she forgive past deceptions and find the courage to love again? Or will she turn away the one man who owns her heart and soul?

Her secret will change his life.

Powerful, and lethal, Kal is a vampire warrior, sworn to protect humans from demons. Loving Katherine too much to pull her into his dangerous world, Kal deserted her, believing his decision was best for them both. But not even time could assuage his yearning for the woman who has captured his heart. As fate tosses them together once again, Kal must fight to win Katherine’s trust and forgiveness before evil separates them forever. But is he ready to become the man she needs him to be? Or will he lose the one woman he can’t live without?

Katherine busied herself by unzipping her suitcase and stacking her clothes on the bed. She sensed Kal behind her, but didn’t acknowledge him.
“Katherine?” Kal cleared his throat. “I know it’s been a huge inconvenience quitting your job and moving in here, but I hope we can at least be civil to one another while you’re here.”
She walked over to the dresser, yanked open the top drawer and dumped her load of clothes inside. “I’ll try, but I’m not promising anything,” she said through gritted teeth.
He cursed under his breath.
She wheeled around. “What the hell more do you want from me?”
“You don’t want to know.”
She slammed the drawer shut. “Try me.”
“You sure?”
“May as well get it all out on the table.”
He closed the door; the lock clicked into place.
Fear of being alone with him took the edge off her fury.
When he looked her way, heat from his gaze burned through her clothing. “I want you naked on my bed. I want you to scream my name when you come. I want to see you smile, hear you laugh.” He pushed away from the door and stalked toward her from across the room. Lifting a hand, he caressed her cheek with the pad of his thumb. “I want you to love me again. But most of all, I want your forgiveness.”
His fingers traced the contours of her jaw, her neck. “I know you don’t want to hear it, but I love you—I always have.”
Her mind screamed run, but her feet remained rooted to the floor. Each word chipped away at her defenses.
Leaning closer, his lips gently brushed hers. “All I’ve ever wanted was your happiness.”
His tongue outlined the seam of her mouth. Desire scorched her willpower. Without thinking, she opened for him, and his tongue swept inside.
A deep groan tore from his throat as his arms tightened around her.

Prophecy's Power, book #3 in the Prophecy Series will be available June 2014.

A high-pitched scream ripped through the clearing and through Soren’s ears as gray demon dust exploded all around him. He spun around with his dagger raised for attack.

A woman wearing a red toque and a green and black Mac jacket belted out another shriek.

What the flying hell? He hadn’t heard her approach. But then again, he was kinda busy fighting three demons.

“Ah, fuck.” Soren sheathed his dagger. He needed to scrub what she’d witnessed from her mind.
Before he could take a step, she bolted. He swore again, then dematerialized.

He took form a few feet a head of her. When she saw him, she slid to stop then stumbled backward with her hands out in front, a warning gesture for him to stay away. The scent of her fear was like burning plastic. Her deep brown eyes flew wide, her complexion flushed from exertion.

“Hey, I’m not going to hurt ya,” Soren held out his hands, palms up.

She continued to back away. “I just witnessed you murder a man, and you expect me to believe you won’t kill me too? Yeah, sorry if I don’t take your word for it.”

Her shaky tone made a mockery of her brave words. “It’s not what ya think, trust me.” Trust me? He almost laughed at how absurd that sounded.

The woman's lips curled into a smirk. She crouched lower with her fists raised, all the while slowly making a wide circle toward the parking lot and safety. “I don’t think so, Asshole. And just so you know, I can scream really loud—the parking lot is crawling with people. If you kill me—which won’t be easy—you won’t get away with it.”

Well, wasn’t this interesting. She definitely had spunk. Soren flashed a smile at her bravado, then took another step in her direction. He stood close enough to catch her scent. Ivory soap with a hint of something fruity, mixed with the arid aroma of her fear. No cloying perfumes. Nice. A gust of wind caught the ends of her long curls and swirled them around her stiff shoulders. Although her terror was ripe, she exuded strength. This woman was no shrinking violet. He sensed she’d fight if she had to.